Following the official announcement of final three Kalon Tripa candidates by the Election Commission on Jan 19, 2011 and the voter registration window now being closed, I decided it’s the right time to launch the online opinion poll on 2011 Kalon Tripa primary election. As you may be aware, the key purpose of this online poll, as with other opinion polls, is to provide an online forum for Tibetan electorates to share their opinion and to generate statistical data based on their shared opinions for analysis.
To participate in the poll, you must be a Tibetan and a registered voter. The poll is designed to restrict participants from taking more than one poll. In other words, you can participate only ONCE in the poll.
Please complete the poll by its closing date i.e., March 10, 2011. The poll is expected to take only about 2-3 minutes of your precious time. Click on the link to go directly to the online poll. https://survey.uwyo.edu/TakeSurvey.aspx?SurveyID=m6KI953ML.
Please be assured that all of your responses will be anonymous. You are not required to identify yourself at any point of the poll. If you have any questions or feedback, feel free to contact me.
Also, please inform or share this poll to all your friends and colleagues. As you can understand, a higher response rate will help to achieve closer results and analysis.
If you are interested in knowing more about the last opinion poll and the procedures I followed for this poll, please read the following section.
Regards,
Denzi Yishey
E-mail: tenyeshi@gmail.com 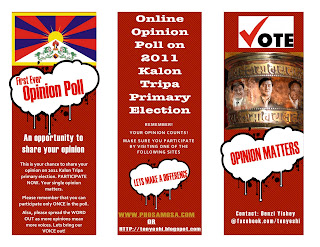 Some More….
1.              To check the “Results and Analysis” (including the limitations) of my last online poll on 2011 Kalon Tripa election, please click this link http://www.facebook.com/note.php?saved&&note_id=490968904012#!/notes/denzi-yishey/results-and-analysis-online-opinion-polls-on-2011-kalon-tripa-final-election/464761934012.
2.              On December 29, 2010, I shared a note on, “Planning, design and implementation: Second/final phase of online opinion poll on Kalon Tripa primary election” to call for volunteers. In that note, I shared my interest to work on one of the limitation of online opinion poll i.e., lack of participation from Tibetan who lacks basic skills in computer and English language. Regretfully, there was not a single volunteer. To read this note, click on this link http://www.facebook.com/note.php?saved&&note_id=490968904012#!/note.php?note_id=479430629012.
3.              Before I launched this online poll officially on Wednesday Jan 26, 2011, I tested the questionnaire items with my Facebook friends to ensure its validity and reliability. I am grateful for their suggestions, some of which I incorporated into this poll. Here is a link of the test note http://www.facebook.com/note.php?saved&&note_id=490968904012#!/note.php?note_id=492258914012.
4.              I am planning to reach as many Tibetan electorates as possible for this online opinion poll. I will be shortly sending some fliers to all the major Tibetan settlements, colonies, monasteries, high schools, and hostels. I am also planning to send an e-mail copy of the flier to all the Regional Tibetan Youth Congress based outside Tibetan settlements such as Chennai, Bangalore, Mysore, Baroda, Chandigarh, etc. If you have any contact in India, Nepal, Europe, or anywhere, I would love to communicate with him or her for a small help with flier.
5.              If any of you are interested in analyzing the poll data, I am willing to share the data after March 10, 2011. Please let me know by March 5, 2011 with your e-mail address and a short description on how-to of your analysis.
6.              I sent an email to the Election Commissioner, Central Tibetan Administration, Dharamsala, India on Jan 23, 2011 to inform about this personal online poll initiative.
7.              On a final note, I am still thinking of an EXIT POLL on March 20, 2011. However, I need several volunteers from some of the key polling areas. If you are interested in volunteering, please feel free to contact me. I am more than willing to provide you with the tutorial and questionnaire items to ask.
at 10:45 PM No comments:

Do Tibetans Need a Democracy in Exile?


In the midway results of ongoing "Online Opinion Poll on 2011 Kalon Tripa Primary Election", 23 percent of participants responded "Yes" and 19 percent responded "Don't Know" to a concluding question, "As a result of the entire Kalon Tripa electoral process, do you believe we, as a Tibetan, are more divided now than before?” Even though the poll lacks a good sampling technique to generalize the findings, from my personal experiences so far, I see indicators of what the 23 percent of respondents may be trying to communicate through their responses.

Throughout the process of Kalon Tripa (Tibetan Prime Minister) election, three groups of interested Tibetan electorates emerged: first, the supporters and campaigners; second, the writers; and third, the observers. The supporters and campaigners have been very vocal and clear about their choice of candidates. I see this category not a problem. They help the general public to learn about their choice of candidate via video footage, fliers, fund raising events, and so on. Most importantly, people in this group generally have faces.

However, the biggest concern I see is the second group of people i.e., the writers. When I say writer, I mean to include every individual who writes (and comments on) articles, opinions, blogs, notes, pieces, and Facebook statuses.

The definition of writers expanded several folds in recent decades with the enormous growth of social networking sites. Scott Galloway in his presentation on "Trends and Impacts on Digital Competence" highlights Facebook and Youtube are the two major sites that shares the highest global online time spent by web users. Therefore, in this social network age, anyone with an Internet connection and a Facebook account can write, post, and comment; and similarly, anyone with a smart phone can capture a video for Facebook or Youtube. The most recent and remarkable inspiration of this digital competence is the uprising in Egypt where protesters connect and organize via Facebook and shares their video to the world via their smart phones. Even though Kalon Tripa election is in no way comparable to Egyptian revolution, one can see the connection on the popular use of social networking site such as Facebook and Youtube i.e., to share views and opinions on Kalon Tripa election and candidates among the exile Tibetan Diaspora.

One of the most popular groups in Facebook on Kalon Tripa election is, "The youths responsibility for Kalon Tripa 2011". On this group wall, a member can see several categories of wall posts, notes, video footage, links, and comments related to Kalon Tripa election and candidates. Unlike the supporters and campaigners, some of the group members, who writes and comments frequently, have "NO FACES". They come with an anonymous profile name and picture which not only makes it easier to be "No One" but also share their opinions with less or no hesitation. These anonymous members are a concern because they share their views and opinions with no accountability and obligation, yet leaving behind a footprint of hatred, disrespect, and division. Tibetan democracy should not embrace faceless Tibetans who do not share a sense of responsibility towards the larger cause i.e., to establish a vibrant society wherein every Tibetan shares responsibility for his or her role in the growth of Tibetan democracy in exile. Remember, democracy is for the people and by the people. It is not for the faceless and by the faceless web users.

Let me share three of the postings in this Facebook group in the last 24 hours. These writings are self-explanatory. One member said, "don;t embarrass urself by abusing me again and again, and please, no half truths..if u got an answer..reply..if u don;t know much about it..reasearch well and answer"; the next one said, "don't try to be slimy and twist the workds, do us a favor ..... if you can't do that then damn you"; and another said, "you brought up the drama so the question should be directed towards you". These three postings are directed towards each members of the group. I chose not to quote postings directed towards individual Kalon Tripa candidates. When I read postings and comments in this Facebook group, I reflect on what President Obama said at a press conference on Feb 9, 2009:

"The strongest democracies flourish from frequent and lively debate, but they endure when people of every background and belief find a way to set aside smaller differences in service of a greater purpose".

On this Facebook group page, I don't see a debate. But, regretfully, I see frequent and lively arguments where a majority of the group members engage in accusing or belittling each other’s views/opinions while keeping their biases firm. It seems every member is trying to prove his or her views, generally based on assumptions, as the absolute truth. I don't see learning by debate or discussion among the group members, setting aside their differences in service of a greater purpose. Rather, they dislike each other by using Facebook as a medium to press their opinions. Is this the reason why a quarter of the poll respondent thinks Tibetan are more divided now? Or are there some other reasons? I will leave other reasons for you to think and analyze.

Also, please remember it is not only President Obama but also the "Basic Education Policy for Tibetans in Exile" that embraces the importance of setting aside small differences and to focus on working for the greater purpose. The meaning of education is not to be recognized as merely grasping what is heard from others. Instead, it is to be recognized as realization of what is heard through the power of self-confirmation and actualization of what is realized through persistent contemplation (Article 2.2 of Basic Education Policy for Tibetans in Exile). I hope Tibetans recognize and embrace this meaning of education to help flourish our democracy in exile in the right direction, bringing Tibetans closer to each other. Tibetans need to grow with the popular saying, "Unity in Diversity".

The final group is the observers. Literally, they are the people with no harm. They confine themselves from writing, commenting, or speaking for anyone or on anything. However, the group is a concern for a democratic society. Democracy works best when it hears the peoples' voices. In other words, in democracy, there should not be a space for “Voice of the Voiceless”.

On a side note, the entire problem with Tibetan democracy in exile may be its origin. Democracy for Tibetans in exile was not earned. Instead, the Dalai Lama, regardless of resistance from the general Tibetan public, bestowed democracy upon the exile Tibetan populace. The problem, associated with the blessed democracy, is the lack of shared responsibility by Tibetans to study the democratic principles, ideals, values, and citizen’s responsibilities among others. The problem seems true among Tibetans as a large number do not share the responsibilities as well as embrace and respect the differences. It needs to be seen how Tibetans will accept the will of the majority when a candidate wins the Kalon Tripa position.


*Published in The Tibetan Political Review on Feb 23, 2011. Here is the link http://sites.google.com/site/tibetanpoliticalreview/project-updates/dotibetansneedademocracyinexile

Also read:
The Coming Collapse of Tibetan Freedom Movement?
and
Failures of Tibetan Leadership at all Levels: Post March 10 Event in New York

An Ode to Egyptian

Egypt is free
My heart shivers
Can you believe?
The people's POWER


*Just wrote while having my breakfast and watching CNN news channel. 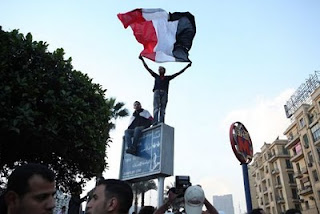