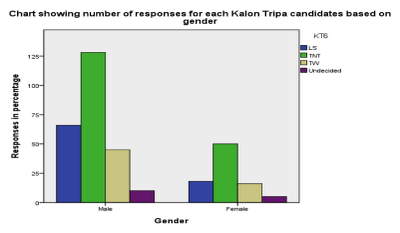 The figure 1 shows that a majority of the participants were male. Also, the support for Tenzin Namgyal Tethong la was higher and evenly spread across both male and female as compared to other two candidates. However, this chart fails to provide opinions of monks and nuns who shares significant vote counts in the Tibetan diaspora. For your information, in the above and following figures, green bar indicates a number of responses for Tenzin Namgyal Tethong la, blue for Lobsang Sangay la, beige for Tashi Wangdi la, and pink for undecided voters.
Figure 2. 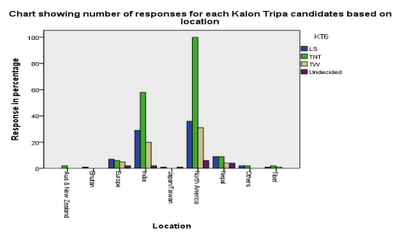 The figure 2 provides information on the number of responses each Kalon Tripa candidates received from several major locations. It was clear that a majority of the participants were from North America followed by India and Nepal. The high-rise green bar on North America and India indicates that the Tibetan electorates in these two locations prefer Tenzin Namgyal Tethong la as the next Kalon Tripa. In other locations, blue and green bar were spread across in proportion. However, the possibility of a skewed result cannot be denied in this chart (and study) as the largest Tibetan electorates still resides in India.
Figure 3. 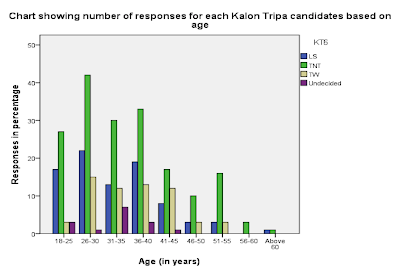