When you hear “Socialism with Chinese Characters”, two questions may ring your ears: first, how this catchword originated? And second, is it different from other socialism? Though there may be several other ringing questions, this piece attempts to explore only these two underlying questions. At present, the world seems interested in this catchword primarily because of the fast growing economic, power, and influence of China across the globe. To put it little differently, the export-led economic growth reshaped China as the  world's factory.

Looking back at China’s history, the present economic growth of China may be largely credited to its past leader, Deng Xiaoping who pronounced a stream of economic reforms in 1978. Unlike Mao, Deng believed, “To get rich is glorious”. Deng focused on four modernizations: agriculture, industry, education, and science and defense (Lai, 2011). With these four (and subsequent) modernizations in the last three decades, particularly industry (my emphasis), the social and economic dimensions of Chinese society generally started to see a sea change. And gradually, these changes evaporated high enough in the sky that it starts to nullify the fundamental principles on which Mao laid the foundation of the People’s Republic of China and his Communist Party. Beginning with Deng’s economic reforms, Mao’s vision of proletariat and classless society changed slowly and dramatically over time. If Mao is alive and visit today’s China, he may not recognize it. He may hardly see a socialist China. 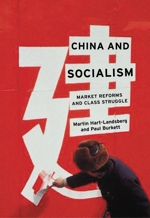 In addition, the role of Communist Party evolved from Mao’s great leap forward to Deng’s economic reforms to Hu’s harmonious society. In the present neoliberal China, the Party began to abandon the farmers and proletariat, and ally itself with the new moneyed classes, the entrepreneurs and businessmen, the urban elite, for whom the farmers are just migrant factory workers (Gifford, 2007). Today’s China is riding high on the neoliberalist agenda of free market, privatization, and decentralization of central powers to counties and provinces. Because of these neoliberalist agendas, China now has two classes of citizens: rich and poor, urban and rural, residents and migrant workers, entrepreneurs and underemployed youth, and businessmen and peasants, among others. This is where socialism with Chinese characters meets its unidentifiable shadows – shadow that fails to identify Mao and his socialism.

Though some may associate “socialism with Chinese characters” with the neon-like glittery side of China’s economic growth and development, it may not be justifying the real meaning of socialism and how it was initially established in China. The initial view of socialism, that helped the rise of Mao and his Communist Party, was generally grounded on the Marxist socialism that embraced a classless society and power to the peasants. As noted earlier, this meaning of socialism hardly make any sense in the present China despite the Chinese leadership’s expression of peaceful rise and harmonious society. This may be the reason behind the need of identity “socialism with Chinese characters” because it no longer associates with China’s past socialist ideals.

If you look at China now, you will see more of capitalism in action. Some did call China as a socialist capitalism. Whether China is an authoritarian state or a socialist capitalist, it seems the socialism has lost its feet and ground in China. For instance, there are cases of land grabs from the peasant, poor, and underprivileged Chinese to make way for business centers, Olympics, manufacturing units, and residential apartments (Broudehoux, 2007). Migrant workers are generally considered as nuisance to the urban elites. The sex industry is booming in China. Peasants are suffering because of high taxes. These are few examples of how socialism may not be working in China. Indeed, it’s socialism with Chinese characters.


Note: This piece is not not-all inclusive.