Neo-liberalization and The Restoration of Class Power

The argument placed by David Harvey on the process of neo-liberalization as a restoration of class power couldn’t be more true now than ever. The “Occupy Wall Street” protests in the United States and its subsequent spread to other neoliberal states provides a stamp of approval on Harvey’s argument. Though we did not see the similar protests in China, it may be absolutely wrong to assume the absence of class power.

At present, though China may have one of the world’s fastest-growing economies, it has also become one of the most unequal societies. Urban incomes that averaged just $80 a year in 1985 soared to over $1000 in 2004, while rural incomes rose from around $50 to around $300 in the same period (Harvey, 2005). The differences in incomes over the years provide a good indication on the rapid increase of gap between the rich and the poor. Moreover, the residential permit system ossified the increasing income gap between the urban and the rural. According to the World Bank, as of 2005, the rate at which China’s income gap increased over the last two decades was the fastest in the world (Fan, 2006). 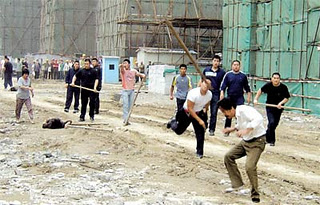 Though the neo-liberalization of China propelled many Chinese women to unimaginable corporate and government positions, it also brought the sex industry, largely in urban cities. In 2008, Shen studied the transnational intimacy between Taiwanese businessmen/employees and sex workers in Chinese Economic Zones. Though her study interviewed only Taiwanese businessmen/employees, it did help to provide a portrait of Chinese women who were supposedly working in Karaoke bars to entertain the sexual need of these transnational businessmen/employees. Based on her study, a conclusion may be drawn that Deng’s economic reforms in China brought not only wealth and power, but also social problems such as the sex industry and income inequalities.

Despite China’s eleventh and twelfth five-year plans focus on closing the widening gaps between rich and poor, it may not succeed until and unless China takes bold initiatives on reforming its domestic policies such as the residential permit system, taxes on peasants, and its economic policies including the land acquisitions, workers’ right, and subsidies on businesses. If China fails to react soon, the “Occupy Wall Street” protests may soon spiral into Shanghai, Beijing, and other parts of the country.
at 4:35 PM