Reinventing The Art of Protest?

From the 13th to 15th of this month, the protest against China’s next President Xi Jinping visit to Washington DC were jointly organized by two Regional Tibetan Youth Congresses (New York New Jersey and Capital Area) and Students for Free Tibet.  Apart from minor coordination glitches, the organizers might mark this protest as a huge success.  They (along with hundreds of Tibetans) were largely successful in welcoming each and every events of Xi Jinping in the capital area with protest. 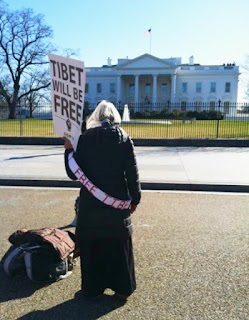 Also, Tibetans in general may be pleased that the protests succeed in securing a reasonable coverage in the international press and media.  The pleasure of seeing Tibetan protests on the front page might have exuberated many Tibetans.  However, many tend to ignore the fact that the end of this protest may help provide insights into the planning of next protest.  The piece therefore is an attempt towards sharing an outsider’s perspective on rethinking the next (or future) protest.

The protest is over.  Protesters are back to their work, school, and home.  Now may be the perfect time to sit and evaluate the protest with simple questions, such as, are there better ways and means to protest?  Did Tibetans (or organizers) miss something?  Was the protest effective?  Will Xi Jinping listen to Tibetan shouts?  Will China start rethinking its policies on Tibet?  Will the world leaders start voicing their concerns on the deteriorating human rights in Tibet? You and me can add many more questions to this list.

To begin with, lets take a look at the protest outside the Camber of Commerce, a building standing opposite to the street facing the back of the White House.  According to the organizers, Xi Jinping was supposed to arrive 3.00PM at this venue.  Tibetan protesters (with Uighurs, Falun Gong, Mongolians, and few Chinese dissidents) waited across the streets with their representative flags, banners, and slogans.  Though Xi Jinping arrival was delayed by about two hours, Tibetans did not wait to protest.  Right after 3.00PM, Tibetans started (and continued) to boo any Asian lookalike (assuming them as Chinese) entering or leaving the building with scathing accusations of injustices in Tibet.  Some even confront them directly on the street with Tibetan National Flag and shouts.

Most disturbingly, for general protesters, it was not even clear whether these Asian-lookalikes were Chinese.  Even if they were Chinese, do Tibetans really need to provoke these Chinese gentlemen and ladies who may be intellectuals, businessman, and entrepreneurs (considering the meeting at Chamber of Commerce)?  When Tibetans shout and protest them, do they still hold the rights to say, “Chinese intellectuals are mum on Tibetan protests in Tibet?”  Aren’t Tibetans losing more by shouting against these Chinese?  What did Tibetans achieve by infuriating or shaming them?  Most importantly, aren’t Tibetans disproving His Holiness the Dalai Lama’s message, “Tibetans are not against the Chinese people.  Tibetans are against Chinese Government and Communist Party”.  Again, the questions keep getting long.

From my perspective, there might be a better way to protest Xi Jinping.  He will be the next President of China, which means he is not in direct command of the Chinese government.  As expert says, it may take at least two years for him to firmly have his authority over the Chinese government i.e., when he gets the command of People Liberation Army and the likely majority support in the Politburo.  Putting this into context, isn’t the protest premature?

How about News headline reading like this: “Tibetans Pled China’s Next President for More Freedom in Tibet”; and “Tibetans Hope A Better Future With Xi Jingping” rather than the same-old headlines.

How about this: Giving President Obama an opportunity to say Xi Jinping at the White House, “See the people outside this White House.  They have a high hope of you in improving the human rights conditions in China and Tibet”.  Xi might not respond but he will definitely smile.

Some added advantages of this “wishful” protest could be: more media and press coverage; more appreciation from world leaders; more attention from intellectuals; more supports from general public; more interest from the Chinese people; and more reasons to smile and hope for.