Scots NO for Independence: What it Means for China and Tibet?

Staying with the United Kingdom continues to provide economic, structural and security benefits for Scotland.  However, new and independent Scotland may end up as a weak country with no or less resources at its disposal. Also, she may have to start from the scratch which could impact the very livelihood of its citizen.

Scots voted with brain - rather than heart -  by opting to stay with the United Kingdom.  Looking at the present world, the decision seems wise and pragmatic. 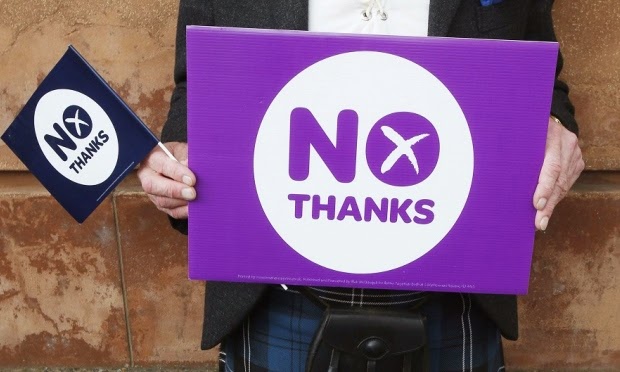 Though this NO vote by Scots is a huge relief for China - who sees its possible rolling effect on Taiwan, Hong Kong, Tibet, and Xinjiang if Scots voted YES for independence - it however does succeed in providing a strong and clear message that people prefers freedom over independence.

Keeping this in mind, China may have to rethink it's policy of repression and exclusion for its minorities.  Putting money into minority areas does not suffice the heart and soul of people who lives there.

The real growth and harmony will not come only from the economic development.  It has to be the combination of economic prosperity and individual freedom.  When this happens, China should not be wary of any referendum for independence.

In the case of Tibet, Scots NO for independence may have given some assurance to the United Front Work Department of CPC Central Committee that the Middle Way Approach of the Central Tibetan Administration based in Dharamsala, India has no hidden agenda for independence.


Note for researcher: Please contact me if you intend to use this video for your publication or presentation.
at 10:31 AM No comments:

Photographs Need No Evidence: This is How I See

Below are ten moments that I captured on my lens during my visit to India.

ONE
This is a very common practice in Tibetan Settlements in South India. You will also see it in Delhi's Majnu-Ka-Tilla. These water-filled bottles (or plastic bags) are hanged in the Patio (Verandah) to get rid of flies and other small flying bugs.  Not sure about its effect but it surely rules the minds of Tibetans in exile. 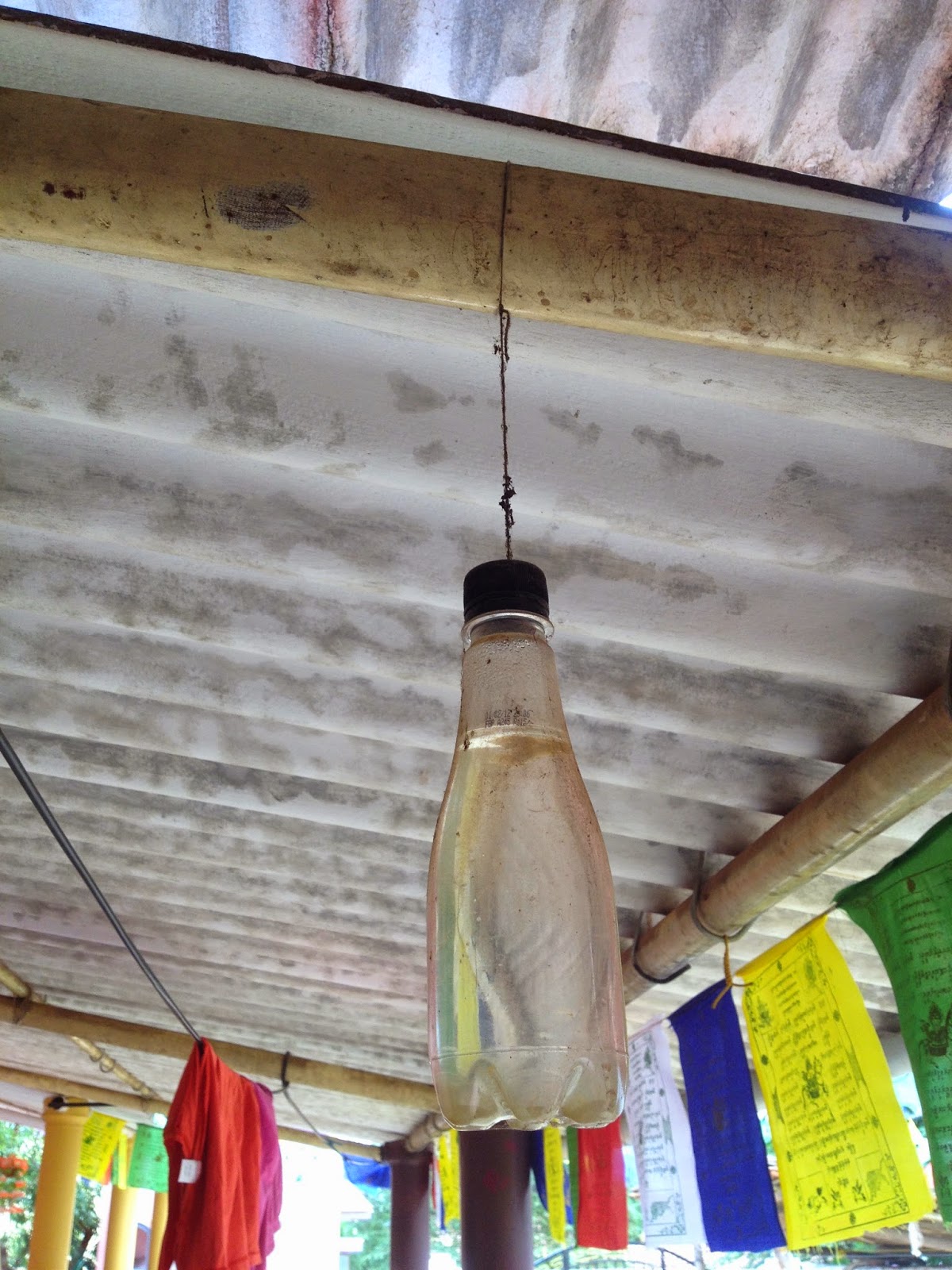 TWO
Myth or Fact: This stupa at camp 4 Bylakuppe is widely believed to be the Wish-Fulfilling-Stupa if you circumambulate 11,111 times. People from all corners come here to find cure for their ailing health, to seek approval for their visa application request, or to earn karma for the next birth.

THREE
Buddhist devotees believe in the power of money. They don't even spare the religious idols by tugging money into their robes. 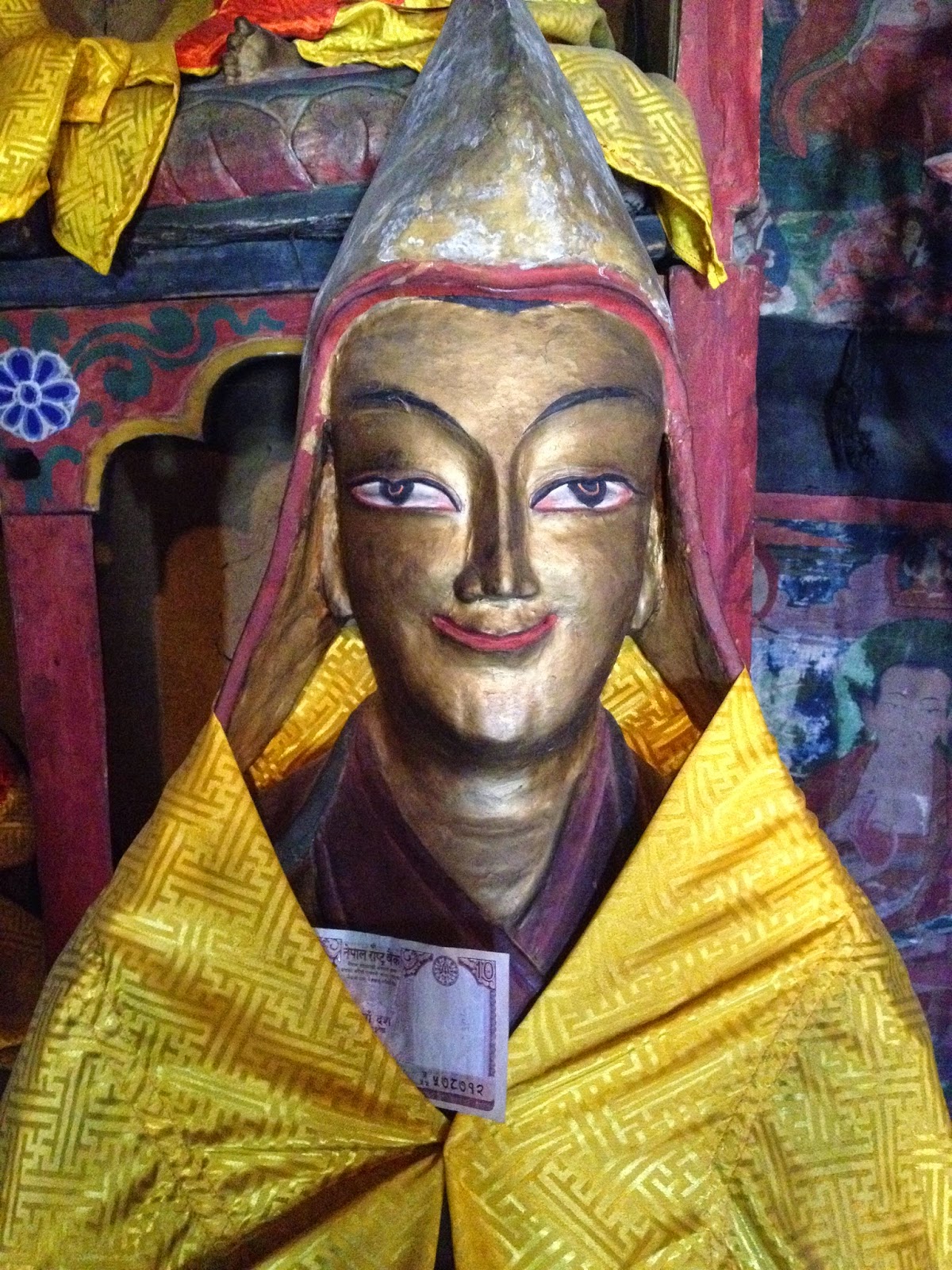 You will also see many devotees feeding money into the hands and feet of Buddhist idols. 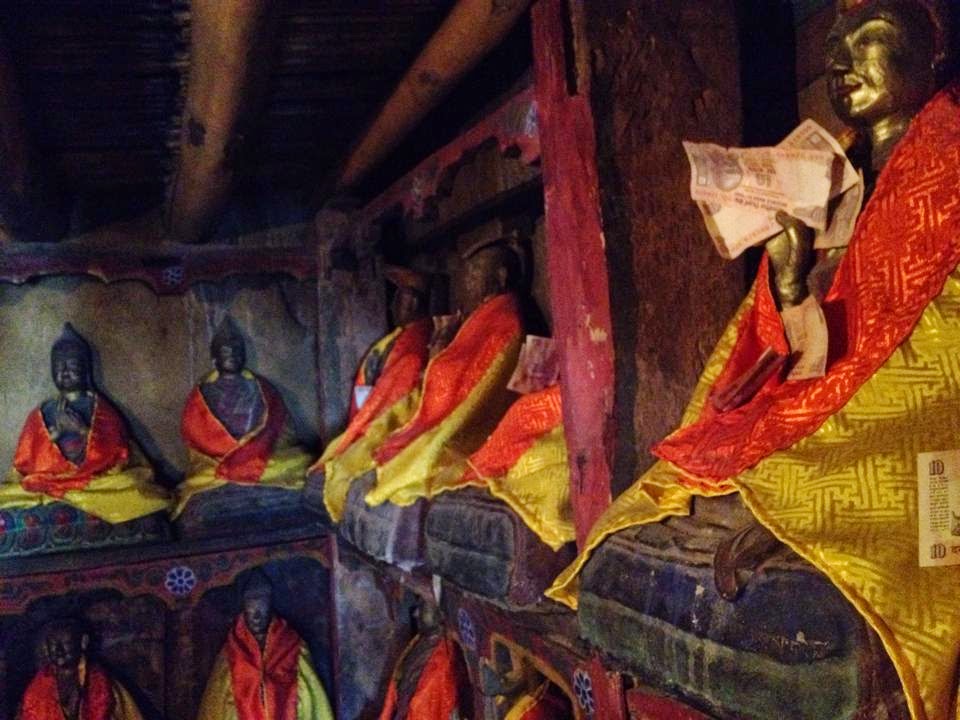 FOUR
Not sure if she is feeling hot or cold in this hot summer of Leh, Ladakh. When I asked my parents the same, Dad responded, "this ra-pag (skin of goat) could be used as a cushion during the Kalachakra teachings and mattress during the night time". Ummm... Makes sense? 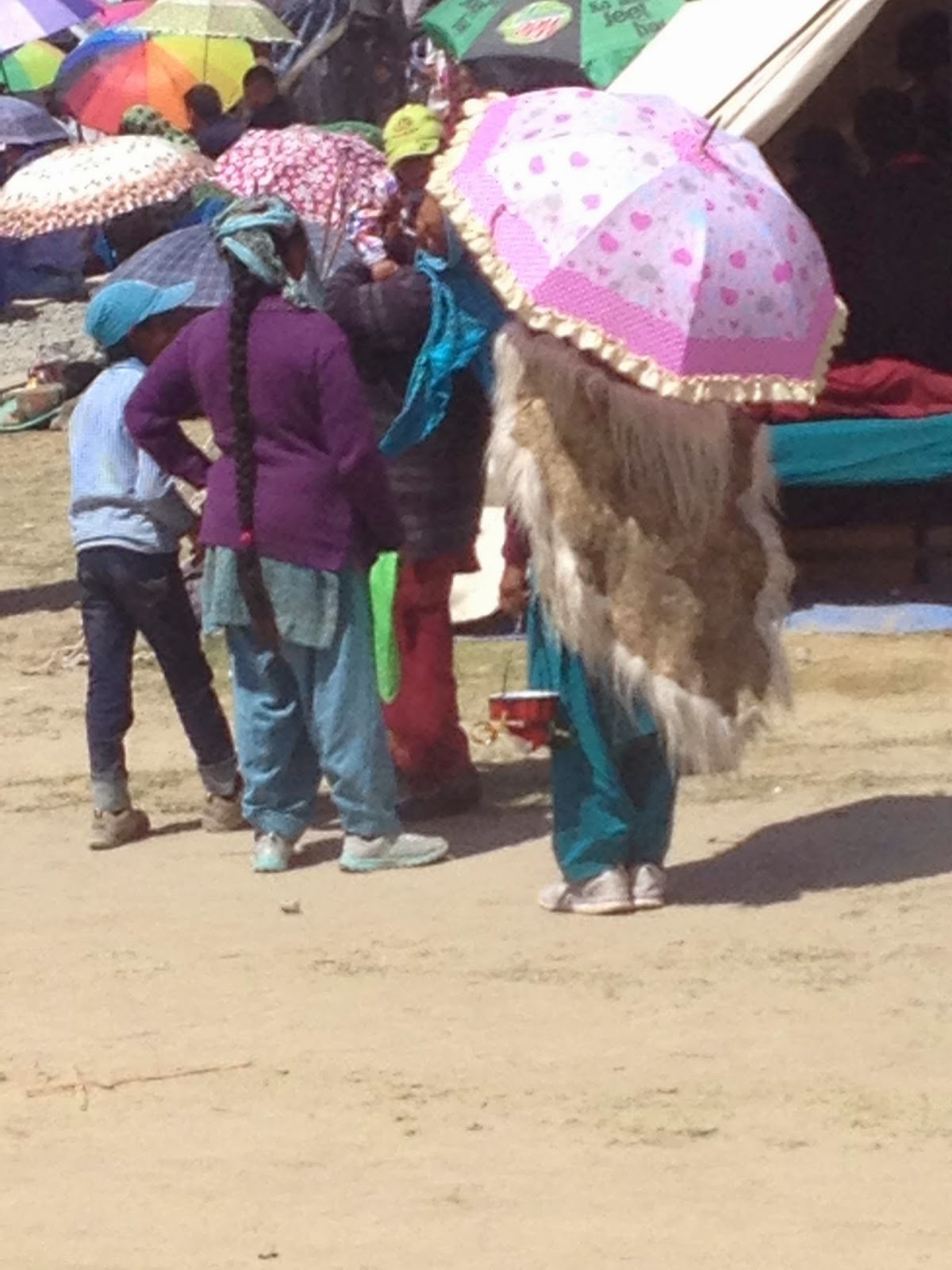 FIVE
In this beautiful birth place of Guru Padmasambhava, devotees feed hundreds of unharmed fish to earn good Karma. This is the place called Tso-Pema (in Tibetan) and Riwalsar (in Hindi). 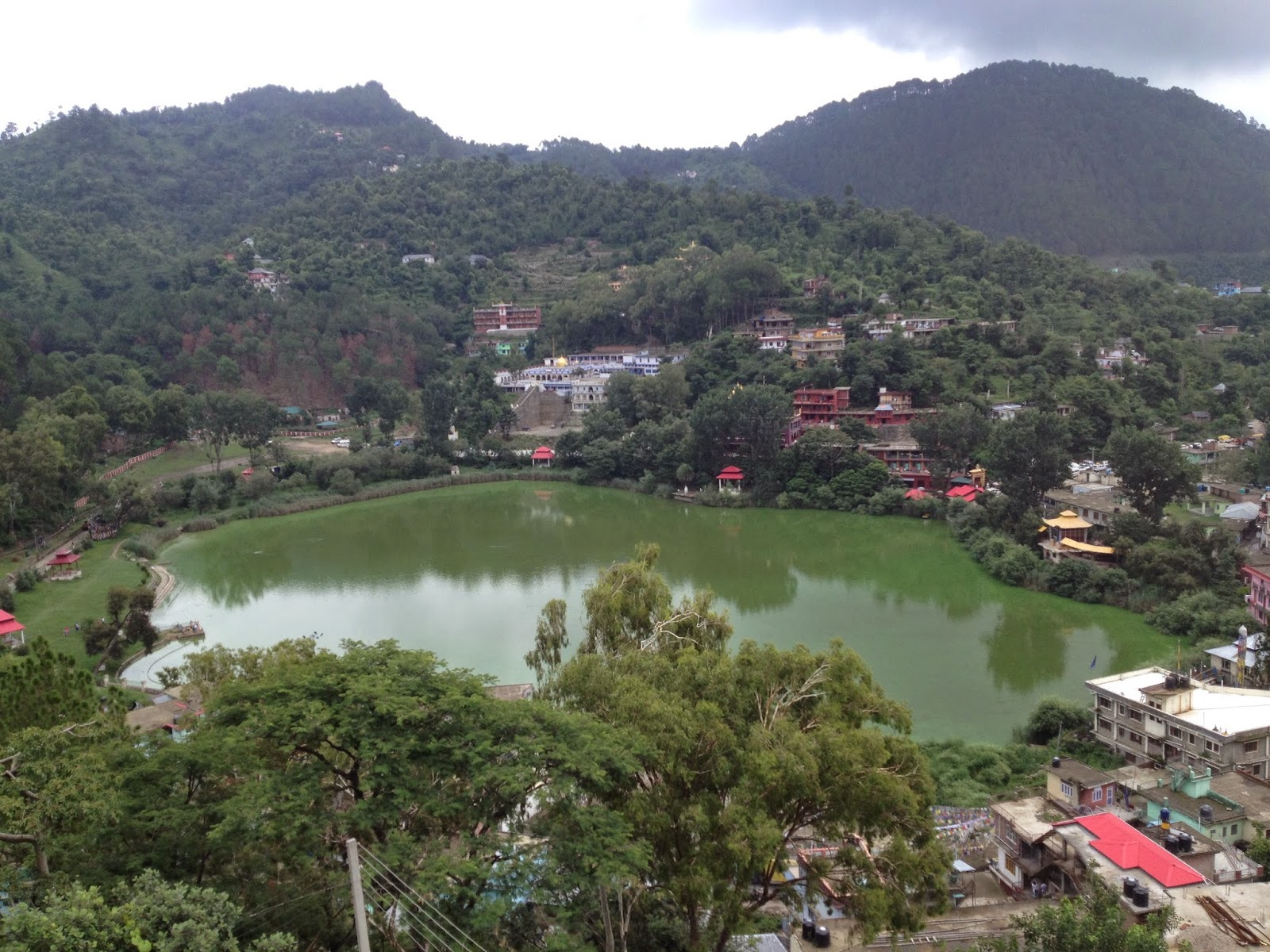 However, during my visit at the end of July 2014, I saw a plenty of dead fish floating every morning on the lake.  Devotees were refrained from feeding for the next few days.  I was perplexed at these number of dead fishes. 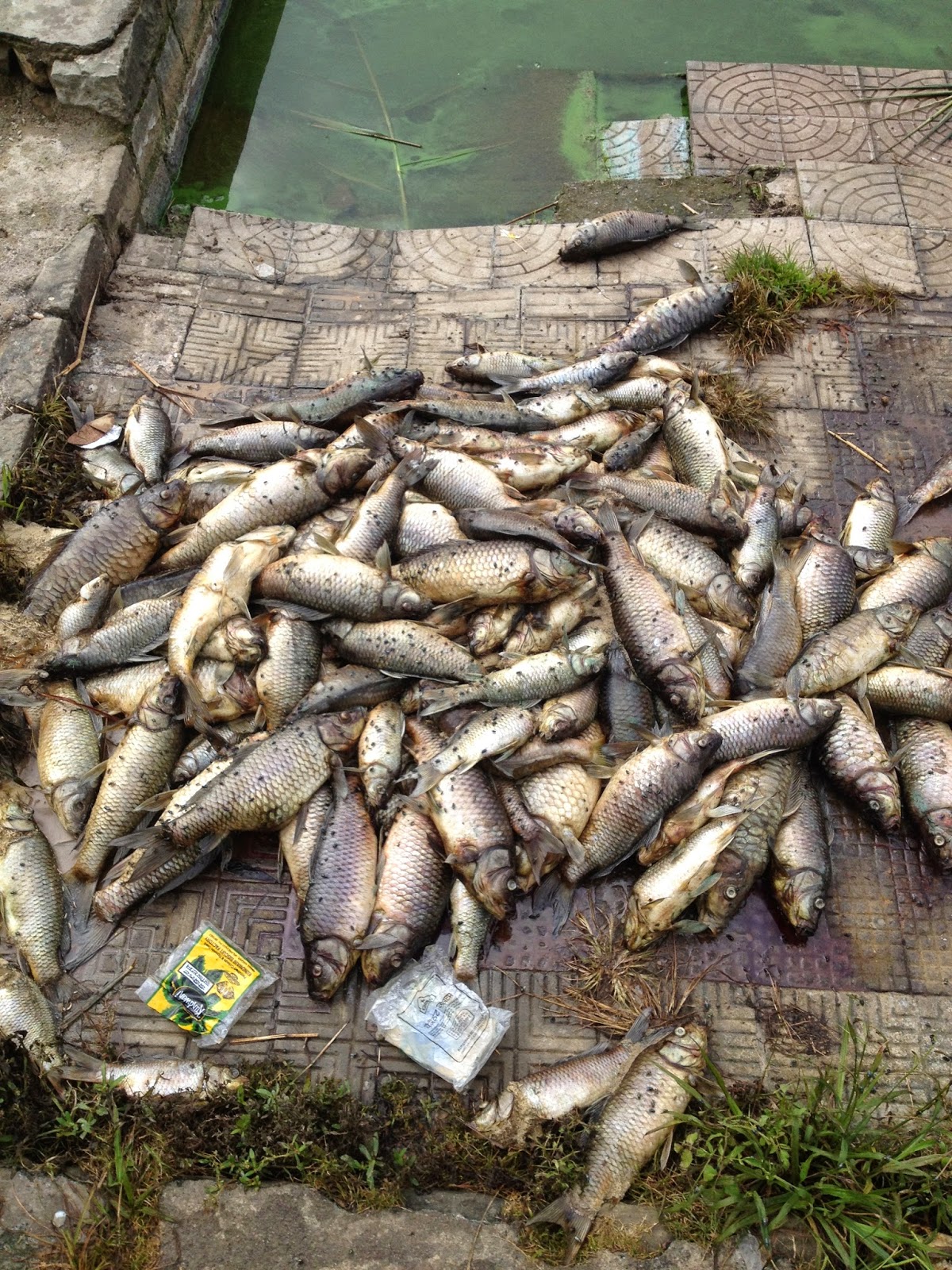 After hearing from several people, there were two prevailing theories behind the death of the fish.  The first one is not supported by the local Indians: That these deaths were caused by chemicals from the nearby Zoo which were washed down into the lake by the monsoon rains.
The second one is widely supported by the local Indians: That a Tibetan man came with several bags of Soybean (Sha-Zuma in Tibetan) and fed the fish - leading to their death (Picture below).
Not sure which theory is true.
But I definitely felt that the Act of Giving should be reasonable, sensible, and respectable.  If the local Indians are to be believed, this Tibetan man might have thought of earning a plenty of good Karmas by feeding too many Soybean. However, the end result is what you see here in these pictures.
An act of kindness has resulted in hundreds of deaths. 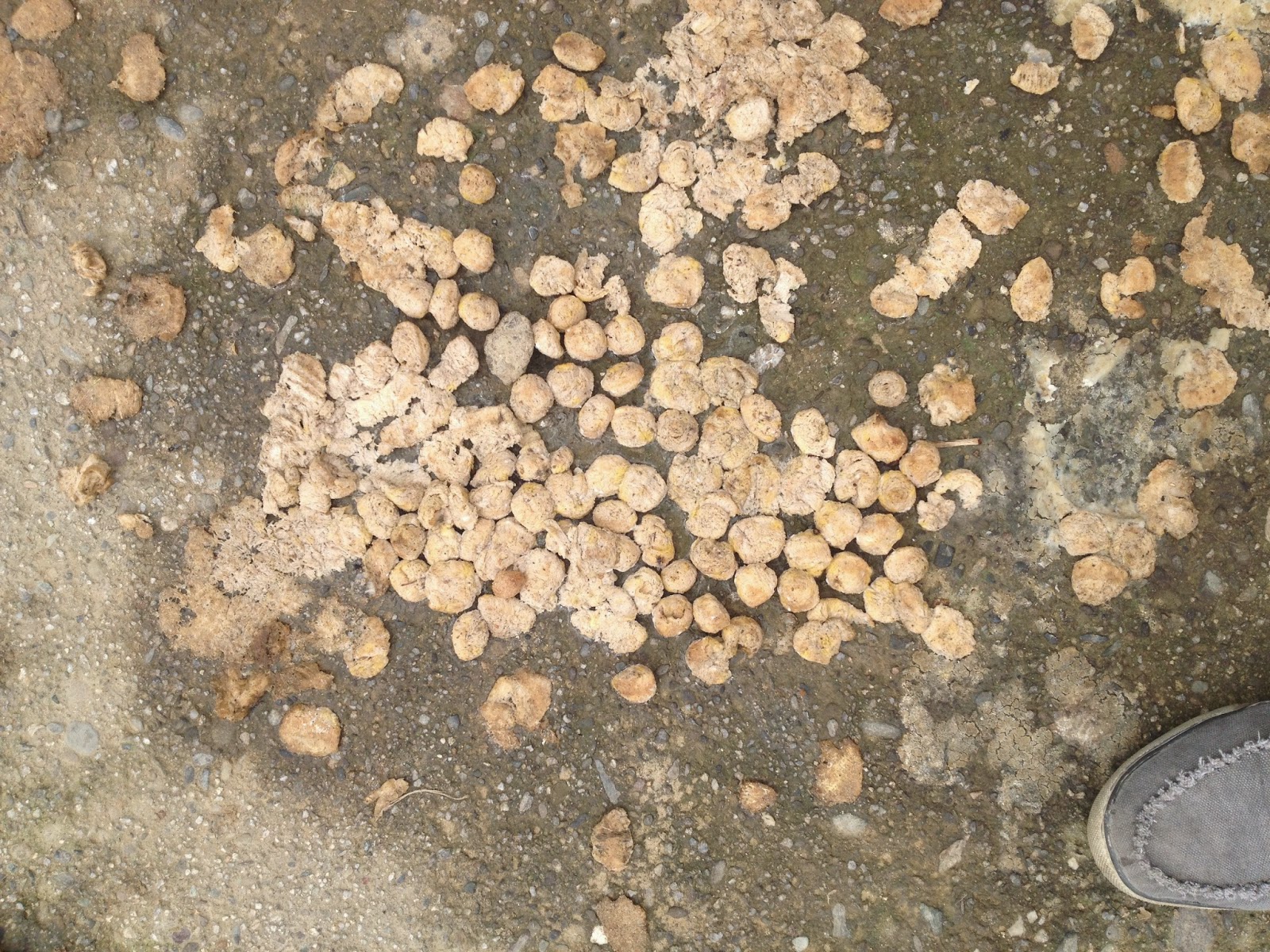 SIX
At the cave on the top of Tso-Pema, there were two large boards that says, "Please don't throw scarf on statue. Don't write anything on wall". 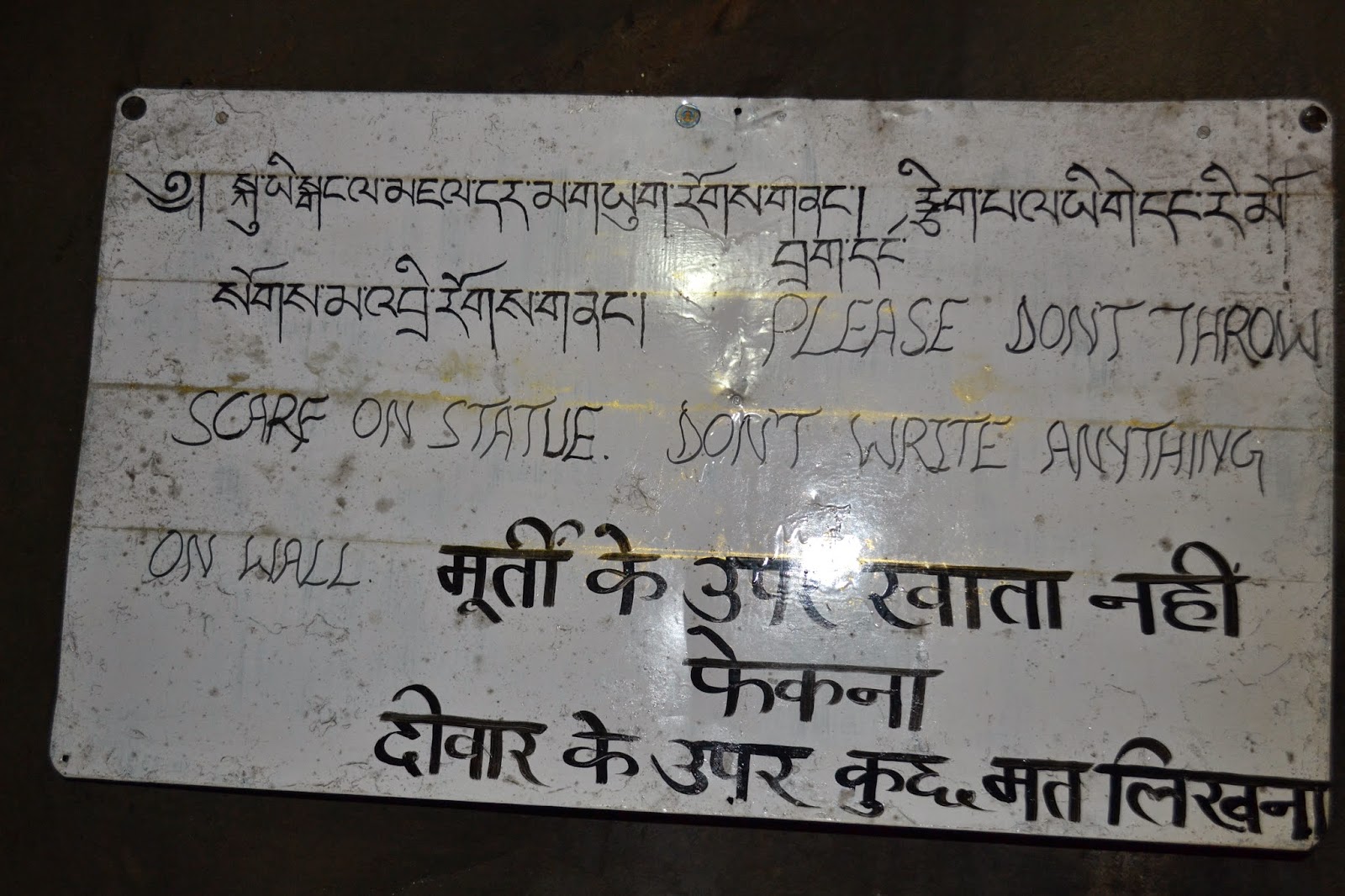 But as you see there are names everywhere on the wall.  Are names really important to disobey the words of Cave caretakers?  Does writing names really make you more blessed than others?  Why? Why? Why? 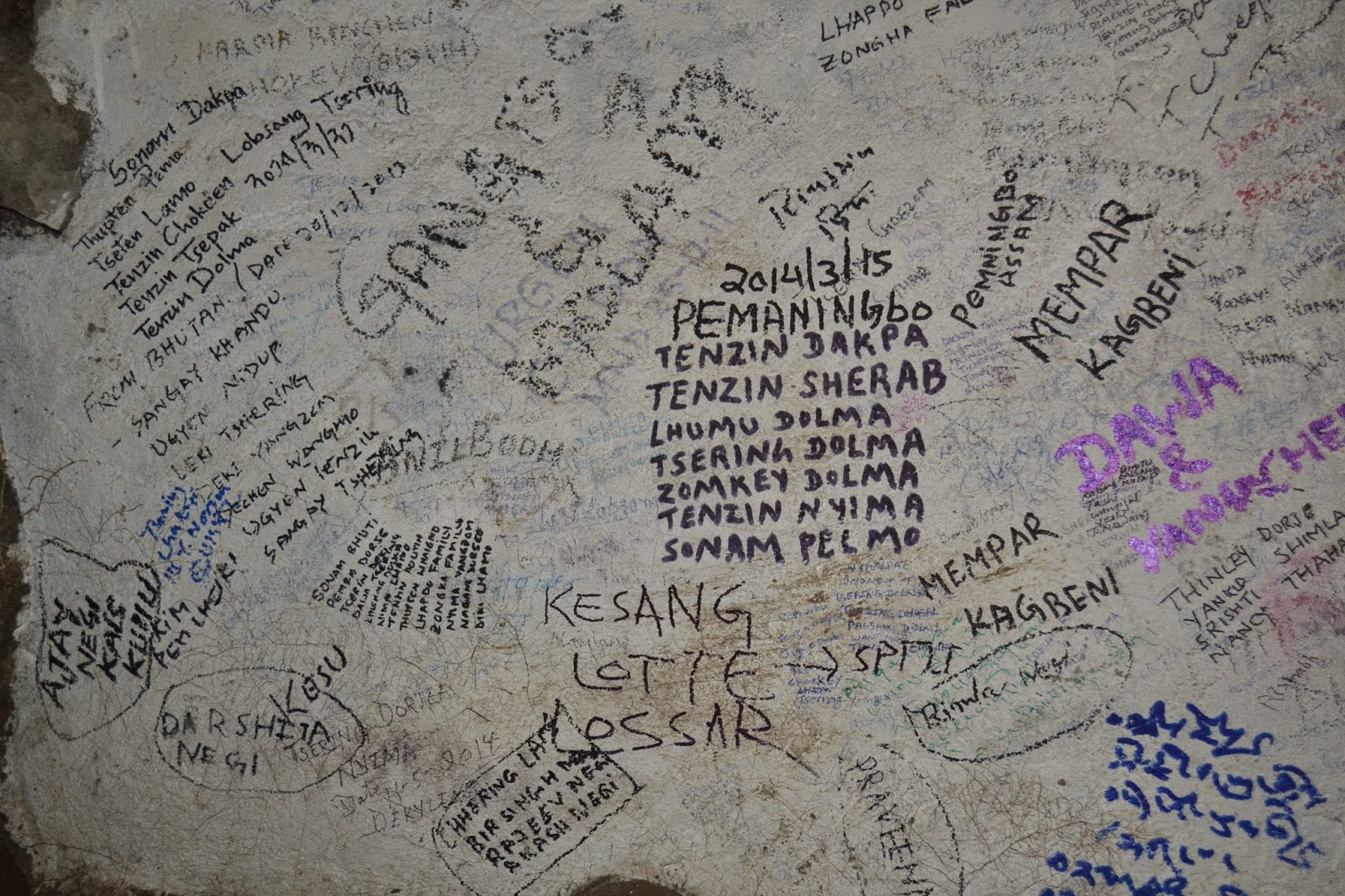 Now on to some lighter MOMENTS...

SEVEN
This is an ancient prayer wheel made from the skin of goat/sheep. 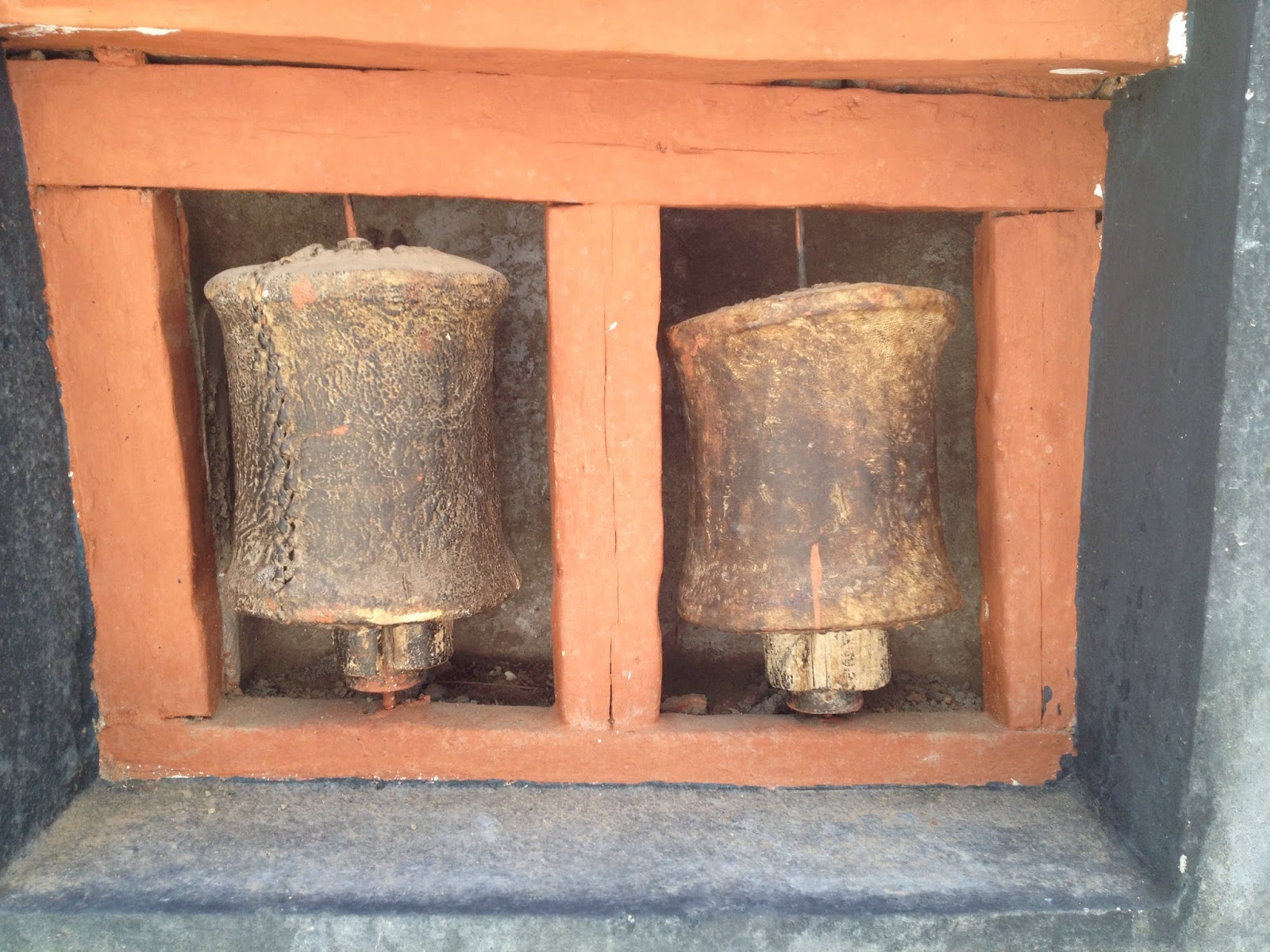 EIGHT
In India, there are hardly any wastes. Everything is put into use: Empty glass bottles are broken down into pieces to secure the boundary walls (picture below); empty plastic bottles are reused as water bottles; food wastes are fed to dogs, cows, and the remaining into a dump hole that generates fertilizer for crops; clothes are patched again and again until it is totally worn out; and if you live in India, I am sure you have more to add... 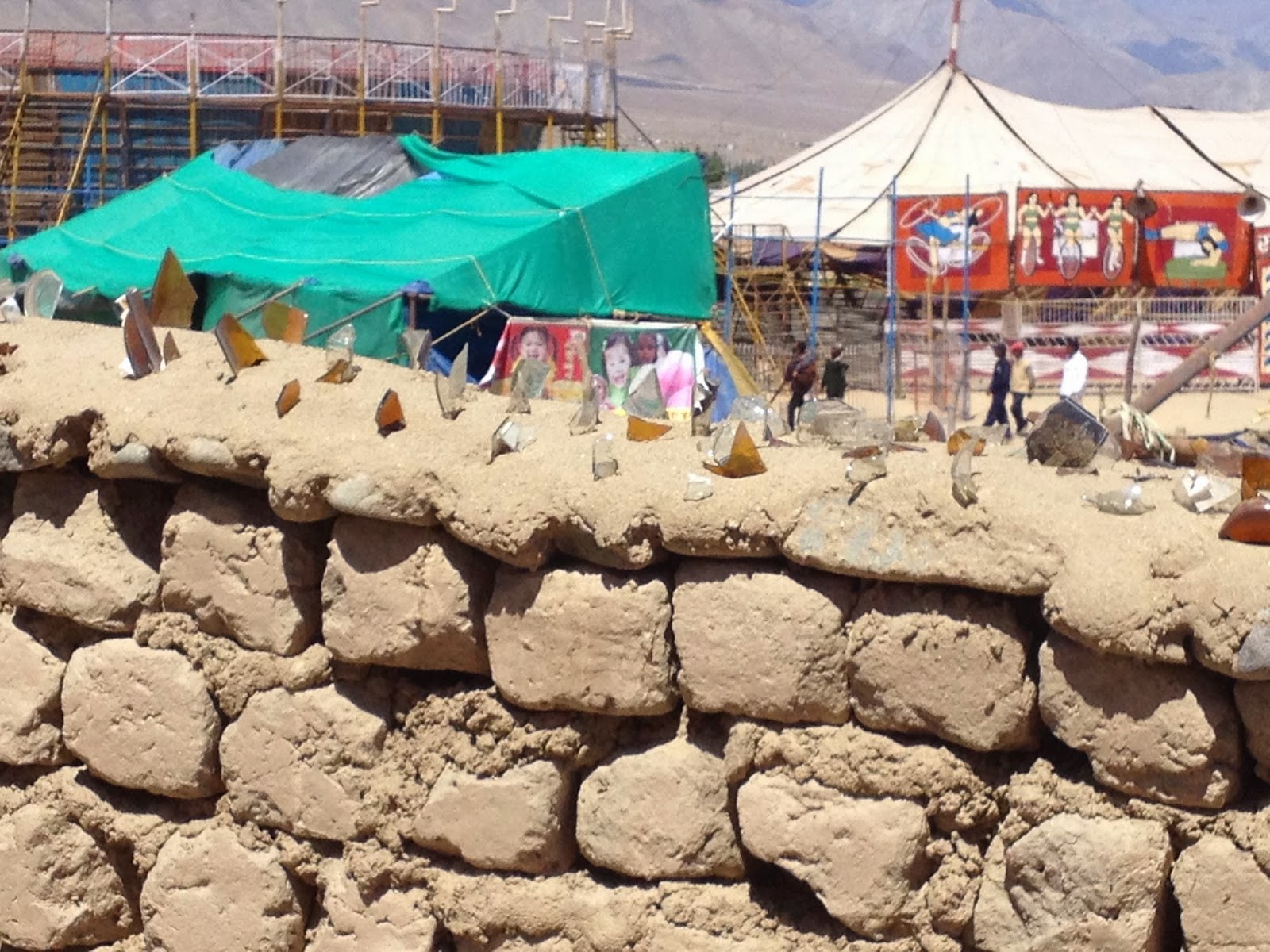 This is a hand-held prayer wheel with wings attached to it.  Since its hot in South India, this attached wing acts as a fan whenever he spins the prayer wheel.  This is designed and created by an 80 year old who lives in Elder's Home. 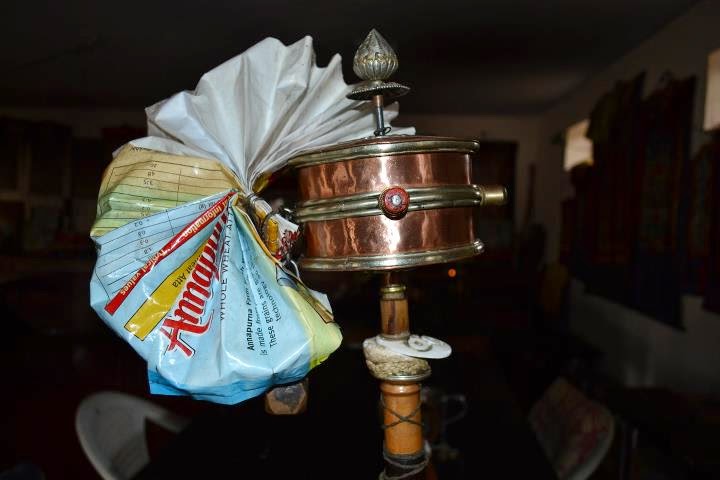 TEN
Finally, a moment to cherish.  In India, the culture of respect for elders is always the Highest.  You will see grand children supporting their grand parents at every corners of the country.  Grand parents are not yet replaced by Google as it is in the most developed countries.  Grand children ask their grand parents seeking answers on all of their questions.
The one reason behind the increasing visibility of grand children-grand parent relationship could be the mobility of younger generations.  Many educated young parent move to big cities or western world seeking a better future - leaving their children with their Dad or Mom. 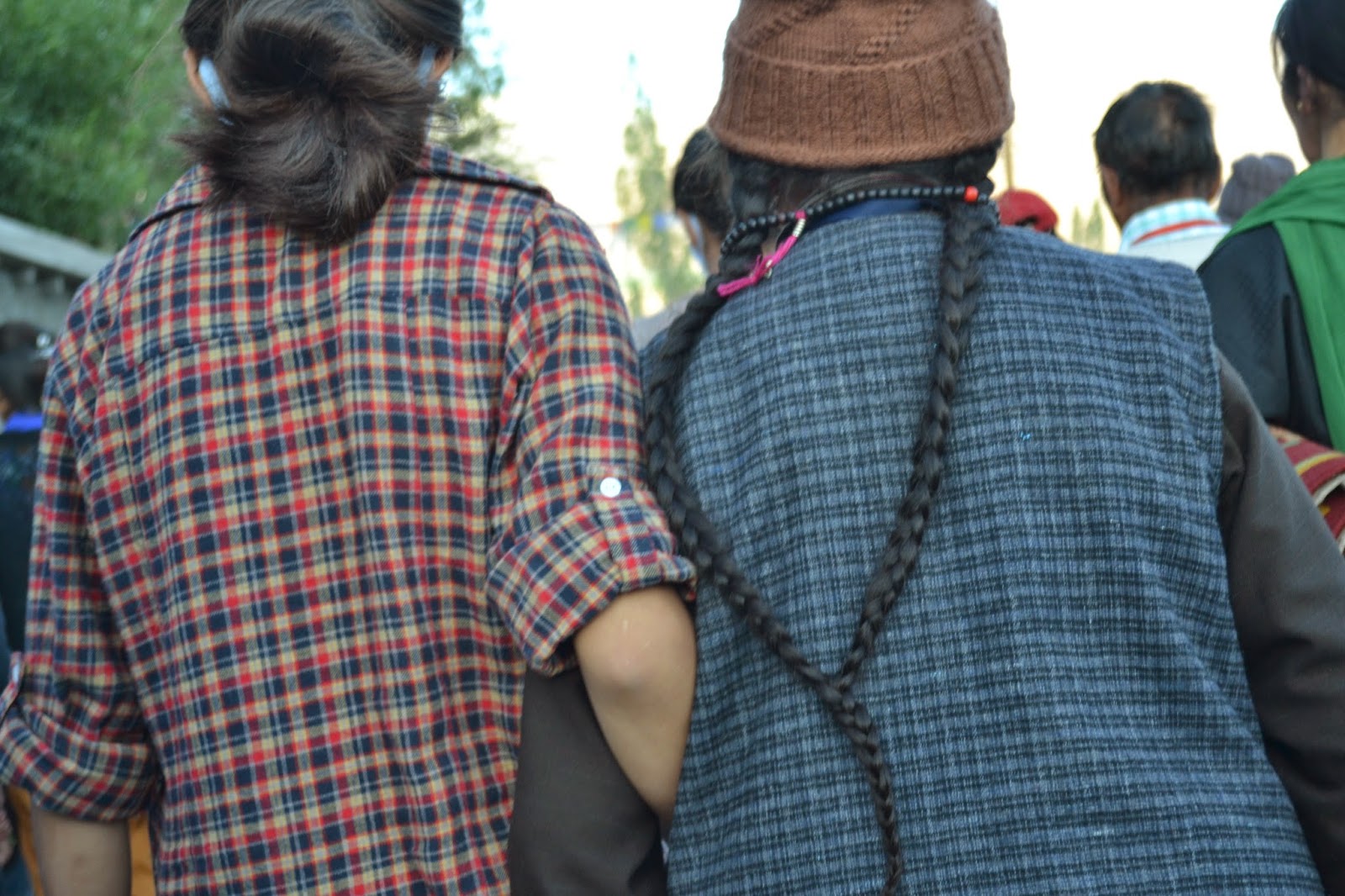