Was Penpa Tsering wrong to see $1.5 million as Accounts Payable?

The explanation from Sikyong last night at Toronto, Canada was very convincing but runs short on the legality as well as fiscal aspect of this entire loan vs grant/donation saga - specifically from someone with a law background.

There is no doubt that The Tibet Fund as an IRC 501(c)(3) registered tax exempt non profit organization is not in a position - legal as well as fiscal - to give away $1.5 million to another registered non profit organization based in Washington DC. So, to protect its own integrity and organization, there is no question that this amount was given in the form of a loan with an unwritten understanding that it will be written off someday as grant. A formal loan agreement seems to be in place according to 2015 and 2016 financial statements of The Tibet Fund.

In both 2015 and 2016 financial statements of the Tibet Fund, 1.5 million was mentioned as Accounts Receivable from the Office of Tibet, Washington DC (registered as Tibetan Community Development Fund Inc) with interest rate and maturity date. In the world of accounting, when there is accounts receivable, there must be accounts payable in the recipient organization's financial statements. This is where the entire episode of mistrust between current representative of North America and Kashag seems to have begun.


What could have been done to stop this from the beginning?

To conclude, without any documentary evidence of this internal understanding/adjustment, there is no guarantee in the eyes of law that someday the Tibet Fund will not ask the money back. For information, the Tibet Fund is managed under a board.

Please note that this piece is written to share information that many might not see due to lack of working experience.

How Penpa Tsering Got Ejected? 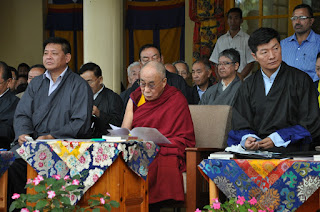 As the designated Representative, Penpa Tsering la inherited the task of clarifying the findings of annual audit report conducted by Auditor General of Central Tibetan Administration, Dharamsala, India. In the audit report, there is a case where the auditor has raised eyebrows about the cost of business class air ticket for Sikyong which was charged to the sponsor of His Holiness's US visit.  This was during Lobsang Sangay la's first term as Sikyong.  Please note that though Sikyong visited the US during His Holiness the Dalai Lama's trip, he is not a part of His Holiness's entourage.  This makes his visit independent and his expenses the responsibility of Central Tibetan Administration, Dharamsala.

Penpa Tsering la got stuck in this truth while Lobsang Sangay la needs to clear this one out from the report.  When two people with different versions of truth come together, there is bound to have a friction.  Now, this friction erupted as an earthquake.

At the end, with no explanation from Kashag or its secretariat, Penpa Tsering la was ousted from the post of Representative of His Holiness the Dalai Lama to North America.

However, the bigger question now is:

Did Kashag ousted Penpa Tsering la with due consent from the Private Office of His Holiness the Dalai Lama?

Spoiler Alert: Please note that this is a fake news :P